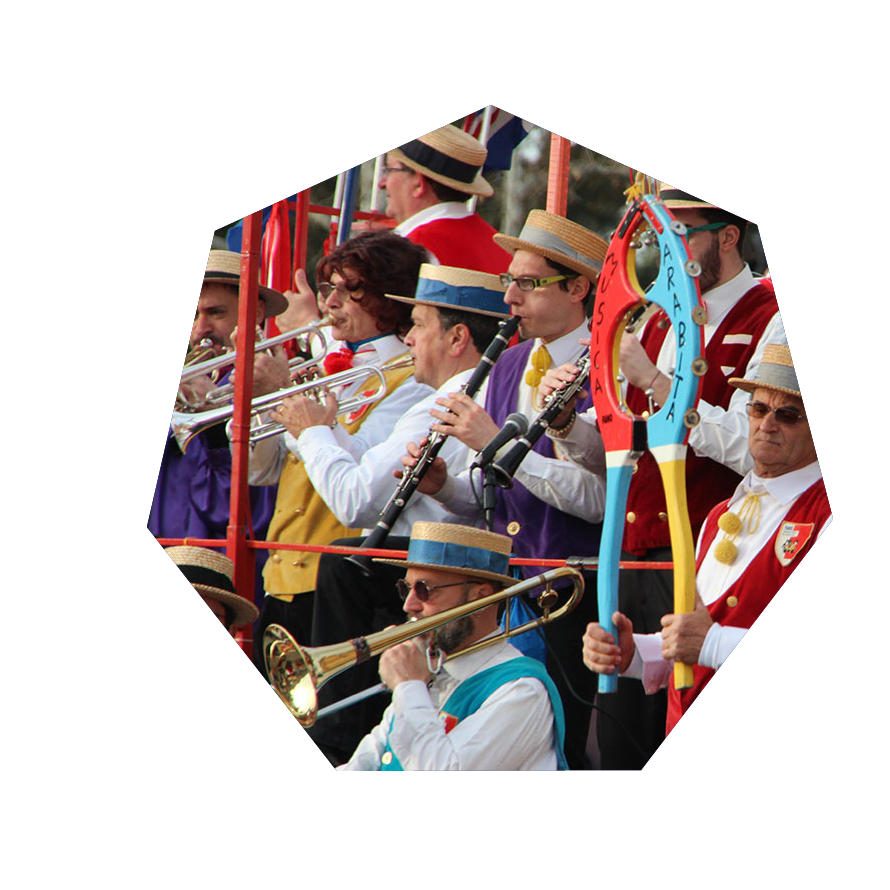 The birth of the current “Musica Arabita”
dates back to 1921
when some cheerful citizens
resumed the ancient traditions
now forgotten and brought them
back to the fore.

The traditions we mention go back to the end of the 19th century when two factions lived in Fano, as in all the other cities of the time: the nobles and the rich landowners on one side, the workers and sailors on the other.

These two factions left themselves out. Particularly in gala nights when the patricians amused themselves listening to musical works, and in the salons piano, violin and harp were on the order of business, while the plebeians were excluded. The first reaction took place because of the exclusion of the “common people” from those salons, especially for their impatience for that kind and melodic music.

So the “Bidonata” was born. The “Bidonata” is a kind of band that drew rhythms at least worse from pots, jars and bins. But those young people who struck those strange soundboards, did not have a discipline and took care only to satirize the delicate instruments of the nobles.

Rattle violins, tin cymbals, horns and cornets made with iron pipes arose were born. But gradually, the group of these happy-go-lucky people thinned so much that at some point it completely dissolved. Just in 1921, however, it happened that some young people rethought the past and thought of reviving the cheerful tradition.

At the beginning it was a period of hardship; then, the group strengthened and went on to cheer with its rhythms all the cities of the Region and then to the international ones. And so the “Musica Arabita” developed, gathered new elements, organized itself to the point of bringing joy and good humor to every party and every festival.

Only in 1957 the group began a new life, the serious and ordered life of a true folkloristic band organized and cheerful at the same time. The members began to meet on preset nights and rehearsed the famous pieces that would have been played in the civic squares.